New Provost at UC: What is a provost? 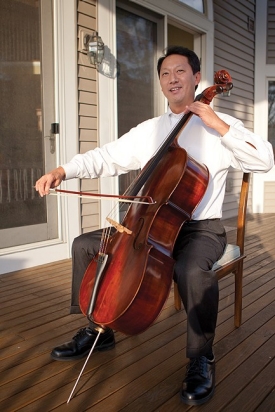 An accomplished cellist, as well as an award-winning medical researcher, UC's new provost, Santa Ono, compares his job to being an orchestra conductor. ''You cannot have the percussion section playing whatever they want,'' he says, ''yet you need the percussion as much as you need the brass. The provost needs to understand the contributions of different parts of the university and coordinate it to achieve the full power of what a university can deliver to society.'' photo/Lisa Ventre

In simple terms, a provost is the chief academic officer of a university. But what exactly does a provost do?

This fall, on the first day of classes, UC's new provost and senior vice president, Santa Ono, had a typically tight schedule: meetings with three different deans; an appearance at a white-coat ceremony; a phone conversation with the National Institutes of Health about research funding; two media interviews; plus internal discussions about potential presidential visitors, enrollment strategies and housing for first-generation, low-income freshman.

Juggling all the aspects of his job is something Ono compares to being a symphony-orchestra conductor — not a far-fetched analogy for someone who is a cellist, medical researcher and academician. "Just as an orchestra is made up of different instruments with different tonalities, a university is a group of individual students and faculty focused on very different things," he says.

"The power of a university relies on the full orchestra sound, bringing those sometimes dissonant voices together into something that is very magnificent and that has an impact on society. A provost can create a coherent response just as a conductor can create a coherent musical voice using different parts of an orchestra.

"If there were no conductor and the orchestra was run by the first-chair of every section, you would have complete chaos. With a single person conducting, it's very coordinated."

A campus of 13 colleges and more than 41,000 students needs a lot of coordination. To make sure everyone is "in synch," he meets regularly with deans, President Gregory Williams and the President's Cabinet to help implement the university's strategic plan.

Ono talks about the need to build bridges between the Academic Health Center and the rest of UC and to coordinate activities across the institution, including regional campuses. In addition, developing new programs and efficiencies to reinvest resources will help create the best environment for students and cutting-edge faculty. He frequently enthuses about the university's move "from excellence to eminence."

Accomplishing that will require an extensive number of diverse players, he says, and that also excites him. "Universities are great because of the contributions each individual makes to an institution.

"Some people would think that a CEO of a company that supports UC is more important than an entering freshman. I do not believe that. I truly believe there is no hierarchy. I work best when I make myself accessible and approachable to everyone."