University of Cincinnati On Campus Yesterday, 1958 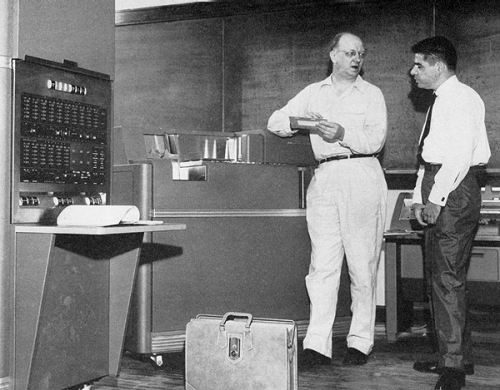 Nearly 6 feet tall and weighing more than 7,000 pounds, UC’s first computer rolled onto campus in three parts via its own sets of wheels on June 1, 1958. Known as the IBM 650, the machine was considered state of the art because it actually fit into one room.

At the time, only a small number of businesses in Cincinnati had computers, using them to calculate sales commissions and process payroll and consumer utility bills. UC also obtained the computer months before East Coast schools like Yale University and the Massachusetts Institute of Technology, due to a link between UC astronomer Paul Herget A&S '31, MA (A&S) '33, PhD (A&S) '35, HonDoc '78, (pictured left) and what was then the Cincinnati Gas and Electric Co. (now Duke Energy).

In the late ’50s, Herget, also director of the Cincinnati Observatory, received astronomy data from countries all over the world. Until that time, he calculated the orbits of man-made satellites and minor planets by using the computer at CG&E’s headquarters.

Thanks to his frequent visits, Herget became friendly with the utility’s leadership, leading to a $32,000-fundraising effort by CG&E, Fifth Third Bank, Procter & Gamble and other area firms to help buy UC its first computer. Along with $20,000 from the National Science Foundation, the money kept the mammoth computer running for nearly two decades, first in Swift Hall, and later in the Physics Building.