A record crowd of 2,200 fans filed into UC's new stadium May 20. The free opener came complete with ushers, a program and a scorecard. Photo/Jay Yocis

Adrenaline-charged players sprinting to their positions for the first time. An anxious coach watching a new era unfold from the dugout. And thousands of fans soaking up the electric atmosphere of a brand new ballpark on opening night.

It was on the third pitch of the stadium's spring 2004 debut that the unmistakable clank of a metal bat impacting with a baseball resonated across the University of Cincinnati for the first time at a game in nearly two seasons. But it was actually the sound that followed when UC's left fielder tracked down the fly ball for the first out that athletics administrators will remember. That was the roar of 2,200 people cheering for Bearcat baseball.

"I think we saw what hopefully is the start of a great atmosphere and a great following for baseball on campus," said head coach Brian Cleary." We have never had a crowd like that to watch a baseball game.

"I thought the fans were great and in particular the students. When they started chanting, ‘Let's go Bearcats,' I've never heard anything like that at a baseball game during my time here."

At the time of the opening, Cleary's tenure with UC included eight seasons. The first six were on the old Johnny Bench Field, just west of the new stadium. The team's average attendance in 2002, the final year there, was 184. The last two seasons, the Bearcats have been a team without a home. And over that time, their record suffered.

"There are bigger problems in the world than UC having to spend two seasons without a baseball field," Cleary said. "But not to a baseball team. This is a dream come true. I walk out there, and it is so nice that you have to kind of pinch yourself to realize it is actually ours, on our campus. I can say, as someone who has seen a ton of college stadiums, this is as nice as there is anywhere in the country. It was worth the wait." 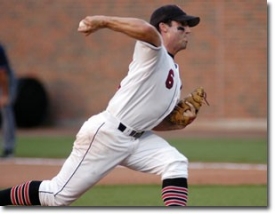 Despite the Bearcats losing the opening game, Aaron Moll, a senior, declared it "the most fun I've ever had on a baseball field." Photos/Andrew Higley

The UC's new $11 million 3,085-seat baseball stadium represents the first completed project in its $80 million athletics overhaul known as the Richard Lindner Varsity Village. Still to come in the privately funded village will be a new athletics center and museum, a natatorium, a tennis complex and a renovated track and soccer complex.

The ballfield, which administrators hope will attract major high-school tournaments, is covered with FieldTurf similar to Nippert Stadium and is fully lighted for night games. Its dimensions are 325 feet down the lines, 365 feet to the power alleys and 400 feet to center field. The outfield wall is 28 feet tall in center field and 14 feet everywhere else.

Fan favorites at the attractive venue include the all-red seats, many of which include backs and arm rests; the large open concourse behind the seats for watching the game standing up; and the convenience of restrooms and concessions along both foul lines.

Though yet to be named, the new stadium will be formally introduced to the campus, alumni and the community with tours and an open house at the start of the 2005 season. When the public gets behind the scenes, they'll find features that rival many minor-league parks: heated indoor batting cages and pitcher's mounds, a fully equipped press box with private viewing areas, a players lounge, spacious locker rooms, laundry and equipment rooms and a state-of-the-art training room.

Forced to pick, Cleary said his favorite thing about the stadium is the way the seats are arranged so the fans are "very, very close to the action." But it is really the whole package that will make the difference.

"I don't think there is any part of our program that the facility doesn't impact," Cleary said. "From attendance to recruiting to the way the players can practice. In short, I think it is going to change the face of our program in much the same way that Fifth Third Arena did for basketball when it was constructed."

Considering the team got to use the new stadium only for its final three-game series in '04, the hardest part for Cleary and his ballplayers will be waiting for next season when they get to charge back onto the field.