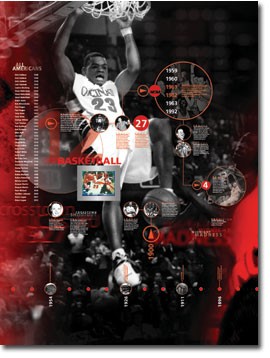 Athletic and academic murals such as this will anchor the graphics inside the George and Helen Smith Athletics Museum within the new Richard E. Lindner Center.

Though University of Cincinnati athletics will take a major stride forward when it enters the Big East next year, its players, coaches and fans aren't likely to forget their program's roots.

Bearcats and those who support them won't overlook the past because UC's rich history, wealth of accomplishments and storied traditions will be impossible to miss in the four-story George and Helen Smith Athletics Museum in the atrium of the new Richard E. Lindner Center. Elements in particular that won't go unnoticed include a soaring glass trophy case suspended in mid-air and a 20-foot-tall video screen.

Athletics' new front-door facility, scheduled to open in December 2005, will become the hub of activity in the new Varsity Village. And all those using it -- coaches on their way to their offices, players headed off to study or rehab an injury and fans stopping in for tickets, souvenirs or a bit of relaxation in the lounge -- will pass through the combined athletics/academics museum space.

To appropriately convey the history of both athletics and academics, administrators hired renowned Chicago interior designer and alumna Eva Maddox, DAAP '66, principal at Perkins & Will.

"We want visitors to get wowed and really understand the Bearcat story and the history of athletics and academics at the university," Maddox says. "There is such a rich tradition here. This is fabulous. To get to dig into the file boxes, cabinets and back areas of the university has been thrilling. We have uncovered so many things that maybe have been told in another way. But I think making them very visual will be exciting and not just a fact on the wall."

"We are a big fan of the co-op program," Maddox says. "The students come to the workplace with such knowledge and such savvy and skills. I think UC excels in every way possible." 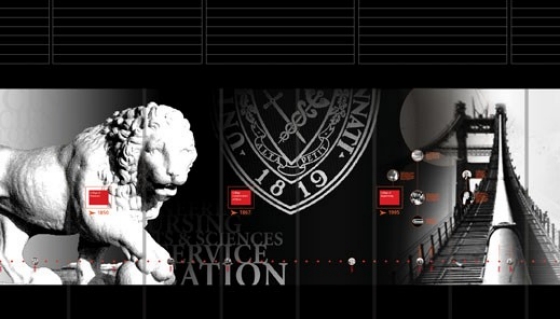 One whole side of the museum will be dedicated to academics.

Visitors to the UC museum will be welcomed by the voice of former athletics director George Smith. Next, they will likely notice the floor pattern of the long and narrow corridor in the center of the building has been divided -- one side red and one side black -- to accommodate installations that represent both academics and athletics.

The installation known as Heritage Hall will showcase UC's academic achievements, milestones and traditions with a display down the left side of the atrium in the form of large murals with rich black and white photography representing each of the 16 colleges. Visitors will see the murals on the glass office walls as well as upper floors and ceilings.

On the right side and also down the length of the space will be Celebration Walk -- 18 different display areas for each of UC's athletic programs, including a video montage for each sport.

"The atrium is about 25 feet wide and a couple of hundred feet long," says Brian Weatherford, DAAP '89, project manager. "We really wanted the experience to go up throughout the entire building. It starts on the ground level but it moves up the atrium on all floors in terms of putting images on the underside of the ceilings, which is really going to move your eye all the way up into the space. It is going to be really unique and very powerful."

Weatherford says the enormous video screen that will hang in the atrium, known as Varsity Village Real Time, is made of a special transparent material that is sandwiched between glass so that it maintains its transparency even when images are projected on it. Thus, viewers will be able to watch ESPN or highlights of the previous night's Bearcat win and still see people traversing through the building behind the screen.

"It is going to be used by both the academic and the athletic side as a marketing tool so that when a student comes in that they are courting, they can really design that program content for that individual," Weatherford says.

Perhaps the most dramatic element of the museum space is the four-story glass trophy case that will be cantilevered from each of the floors, giving the impression the trophies are floating. Inside will be more than 100 awards from all of UC's sports programs. Other elements in the museum space include a Hall of Fame Wall, the Jack Twyman Traditions Lounge and the All Americans Gallery.

It all promotes reflection on UC history while encouraging its students and student athletes to make a bit of their own.