Bearcat alum in the big leagues 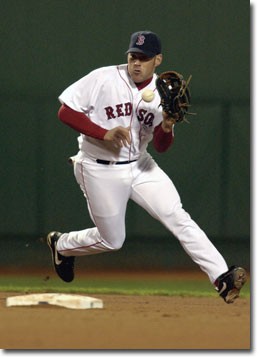 Former Bearcat Kevin Youkilis, a 2001 eighth-round draft pick by the Boston Red Sox, made quite the rookie splash when he got the call to replace the injured Bill Mueller at third base.

The one-time University of Cincinnati star announced his presence May 15, 2004, by homering for his first major-league hit in his second big-league at-bat. After the smash, Youkilis pointed to his parents behind the dugout who had flown into Toronto from Cincinnati that morning. Once he made it back to the dugout, his prankster teammates, apparently at the urging of ace Pedro Martinez, sat motionless instead of congratulating him. Youkilis feigned high-fives anyway.

It didn't take long, however, for his teammates to fully embrace Youkilis, particularly after he was named the American League Rookie of the Month in May. In just 13 games, he batted .318, while scoring 15 runs and hitting four doubles and one home run.

Kevin first received national attention a year earlier when he reached base safely in a record-tying 71 consecutive minor-league games. He has also become known for his ability to draw walks -- a reputation that may well stick considering last year's best-seller, "Moneyball," dubbed him the "Greek God of Walks."

Youkilis is the first Bearcat to reach the majors since George Glinatsis pitched for the Seattle Mariners in 1994. He is considered one of the top prospects in the Red Sox system.