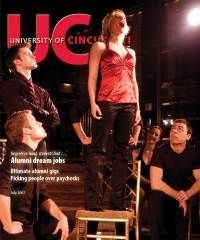 I picked up the July "University of Cincinnati Magazine" and was simply blown away by the excellence of the photography and art design. Gorgeous! Splendid! Well done! I see such magazines from Yale, Harvard, Oberlin, etc., and, believe me (dico expertus), this is as good as it gets. This sort of excellence is really important to bring to notice, as it has immense impact on profile, not to mention morale.

I received the most recent "UC Magazine" and noticed a picture that looked vaguely familiar to me. It was Jill Casagrande [CCM '83] of Disney Radio, who was one of my students when I taught in the broadcasting division of the College-Conservatory of Music from 1977 to 1985. I have not seen her since the mid-'80s, when I believe she was still at Channel 64 and I was a department chair at Xavier. I guess all professors look back and come up with a list of students who were marked for success. Jill was certainly one of them.

I write regarding UC's expansion of domestic partner benefits, which I read in your February issue of "UC Magazine." I feel that I might have had something to do with it, and I am enormously proud of that legacy.

In 1997, my daughter, Carol Stuart, with her friends Jeff Sheehy and Geoff Kors, hatched an idea around a kitchen table that changed corporate America, the insurance industry, the provision of health benefits and even the notion of families in America. Together, the three of them co-authored San Francisco's Equal Benefits Ordinance (EBO).

The EBO was very simple. It required businesses contracting with the city of San Francisco to offer the same health and benefits packages to the families of their lesbian and gay employees in domestic partnerships as were offered to their married employees.

Principally sponsored by San Francisco supervisor Tom Ammiano, the Board of Supervisors approved the measure and the mayor signed it into law in May of that same year.

Though 10 years ago, the EBO was called revolutionary, and it is now duplicated in cities, states, colleges, universities and the private sector across the country.

While San Francisco's EBO created a more-even playing field for lesbian and gay families and was heralded as a step forward for gay rights, in reality the policy was much more far-reaching than most that followed in its wake. Unlike most other policies enacted -- but like UC's recent policy -- San Francisco's law would not discriminate against heterosexual couples who also chose to become domestic partners rather than marrying.

In a kind of separate-but-equal posture, not unlike the "whites only" drinking fountains of our nation's past, many laws enacted around the country limit domestic partnerships to lesbians and gays. Moreover, they limit the provision of benefits to the lesbian or gay partners of employees.

The original co-authors' refusal to discriminate on the basis of gender in the provision of equal benefits was a point of contention even among San Francisco's progressive left. In a statement that chilled any opposition, my daughter argued, "Just because the heterosexual community discriminates against the lesbian and gay community, does not make it right for the latter to discriminate against the former."

Thanks to the EBO, hundreds of thousands of people, whom my daughter, Jeff and Geoff will never know, can take their child to the emergency room or care for an aged parent or be treated with the same respect as their co-worker when their loved one dies. These are basic fundamental rights, which could be afforded us all under a sensible universal health care program, something my father, a professor at the university's medical school, advocated 60 years ago.

I continue to be a proud member of the University of Cincinnati family. 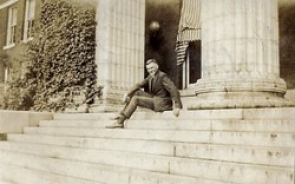 Here are pictures that my father, Alfred Shofner, took of the campus in 1922 when he arrived from Fayetteville, Tenn., to co-op in the College of Engineering. In those days, the sections were three weeks of work, then three weeks of school. His co-op job was with an auto-manufacturing plant in Detroit, and he made the trips on his Indian motorcycle. When we go to Michigan every summer on I-75, I wonder how bad the roads were in 1922-23. 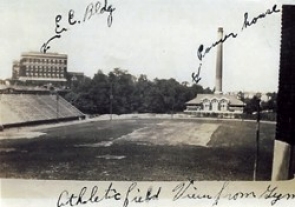 I arrived at UC on Sept. 18, 1944, which was my 18th birthday. I loved my experience as a co-op; however, I met the love of my life and never finished the program. My husband, Richard Howell, graduated from the UC College of Medicine in 1951, and we just celebrated our 60th wedding anniversary Jan. 30.

I recently returned to the UC campus after a few years and was shocked at what I saw. I was under the impression that UC's MainStreet project would actually resemble, well, a Main Street.

Instead, the curving, uninviting, winding path looked more to me like suburban sprawl, crawling through gray, cavernous wind-tunnel spaces. To top it off, the "Main Street" was lined with buildings that appear totally out of context with the historic buildings they jut out from.

Was the new Recreation Center designed after the Cincinnati Justice Center? Heck, the typical suburban mall more closely resembles a Main Street environment than UC's version. Should a developer in the "real world" submit plans like UC's MainStreet to the local planning commission, they would be trashed by the very planners that UC has trained over the years.

It was a coincidence that I received UC e-mail with the Oscar Robertson [Bus '60] video on the same day, June 28, that Oscar had a wonderful column on the OpEd page of the New York Times. I most highly recommend that the UC administration take that article to heart, vis-à-vis the NCAA, and cherish it for its description of what a college education is or should be about.

The term "student athlete" is so overused that it has little meaning today. But Oscar was a legitimate student-athlete. (Bus Ad was almost as hard as engineering, and both were harder than they are at present.)

Oscar's only unfortunate impact on UC was as a legitimate beneficiary of "princely" co-op wages, UC sometimes took a bum rap for "paying its athletes." People who have never been subjected to the rigors of top-flight college or high school athletics just don't understand its physical, mental and time demands, in addition to those demands in the classroom.

Oscar's N.Y. Times article advocates some minor payment to student athletes, many of whom have far less "money from home" than the average student. Of course, many schools and alums disgraced themselves by paying under the table, like IU, in Oscar's day.

Ask yourselves at UC if paying a moderate, well-controlled amount to student-athletes is intrinsically wrong. The answer is "yes" if we accept that it is inherent for schools/alums to cheat and ignore the rules in order get an edge over other schools. The answer is "no" if we predicate our behavior, expectations and demands on the character of Oscar Robertson. 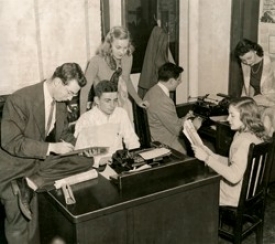 Editor's note: That poor fellow has been identified as Edward Grad, A&S '52, MS (A&S) '53; Henry Hauenstein, Eng '48; and Al Batik, A&S '50. We know it's not Henry because he personally told us so. So far, the choice of Al has the most votes since John has added his, but the vote for Ed was pretty strong, considering it came from his widow. This guessing game, which I now call the "News Record" Challenge, has been going on since May 2006.

This is a note regarding your story about George Sperti. I, too, grew up with Sperti's Bio-Dyne and was bereft when it became impossible to find. We even wrote to Whitehall Laboratories asking for help in getting some more.

I had often told my husband about its wonderful properties and the story of our neighbor's kitchen fire. When my mother heard the screams and saw the flames spreading from the frying pan, she yelled for us to bring the Sperti's. Once the fire was extinguished, mother slathered the precious ointment on Mr. Holmes' burned arms and face, and drove him off to the hospital. And yes, everywhere the Sperti's covered, our friend healed with nary a blister; and the places she missed took a long time to heal.

Then one day we were visiting a small New England town, which time seemed to have forgot, and there, on the shelf of the old drug store, just past the soda fountain with the green swivel stools, was a single, dusty tube of Sperti's. I bought it and have been using it ever so sparingly for the last 15 years. Tonight I allowed a tiny dab for my husband's scraped and raw fingertips. We are sure he will be better in the morning. Preparation H just doesn't work quite as well.

Thanks for telling the story.

Editor's note: The active ingredient in the original ointment is no longer available in the U.S., but it is found in the Preparation H that is sold in Canada and abroad.