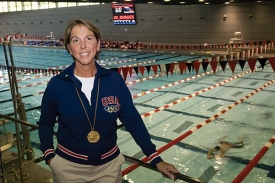 Jenny Kemp toured UC's Keating Aquatics Center on her return visit to UC in 2008. She earned Olympic gold for her part in the 1972 4X100 freestyle relay.

Jenny Kemp had made it nearly a decade with hardly any of her coworkers knowing she was an Olympic gold medalist.

That was, of course, until UC Homecoming in October 2008 when her name was announced during the halftime ceremony to recognize alumni Olympians. Kemp walked onto Carson Field at Nippert Stadium in front of 32,000 cheering fans, some of whom were rather surprised to see her among those being honored. It didn't take long, however, for word to spread at her office the following Monday, mostly thanks to e-mail.

Seems she failed to mention to her colleagues at UMR that she was once one of the world's greatest swimmers and helped the United States win gold in the 4X100 freestyle relay. For Kemp, att '75, her performance at the Munich Games in 1972 isn't something she typically brings up in casual conversation. As she puts it, "We just never had show-and-tell day." The UC ceremony "opened up a can of worms for me at work," she jokes, pointing out she spent the following week explaining herself to everyone from executives to the delivery guy. While Kemp is certainly proud of her Olympic relay medal, her reservation to talk about the '72 Olympics has stemmed from her feelings of regret for her individual performance at the Games.

"I never really think about my Olympic experience," she shares. "The disappointment always took precedence over the medal. To this day, I will never let myself off the hook." Kemp was only 17 when she and a few other members of the Cincinnati Marlins swim team were invited to Olympic trials near Chicago. Going into the meet in April of '72, Kemp was virtually an unknown in the swim world. By the time the trials were over, the high school junior was carrying the burden of her country's expectations.

That's because Kemp, though usually a backstroker, turned in an Olympic-qualifying time in the 100-meter freestyle. Beyond that, she had also set an American record. "All of a sudden after this meet, I'm taken away into a training camp. I was leaving my family, my friends and my coach," she says.

In the days leading up to the Olympics, the international media began pitting Kemp against Shane Gould, a 15-year-old swimming phenom from Australia who had broken 11 world records. Upon entering the Olympic Village, Kemp saw front-page stories and T-shirts proclaiming. "Everything is not Gould." "There was a lot of pressure," she says. "I thought, 'Oh my God, what have I done?'"

The young American swam an "off" race in the semifinals and failed to qualify for the medal round. There would be no showdown between Kemp and Gould. Despite the letdown, Kemp went on to help the Americans win gold in the relay, a race that became one of the most exciting of the Games as the U.S. team edged out Eastern Germany by four-tenths of a second in front of 10,000 spectators. Kemp would later follow with collegiate success as a Bearcat swimmer, and in 1975 she won an individual bronze medal at the Pan American Games.

"That was when I had my Olympic experience," says Kemp. "The Pan Am Games were down in Mexico City. I was three years older. I knew what to do. I knew what not to eat. That was the one I really loved because I did it the right way." 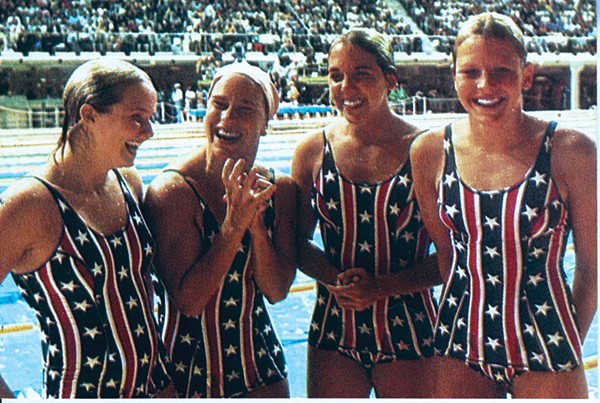 Jenny Kemp (third from left) and her U.S. teammates celebrate a gold-medal swim in '72 only seconds after defeating East Germany by four-tenths of a second in the 4X100 freestyle relay at the Munich Games.