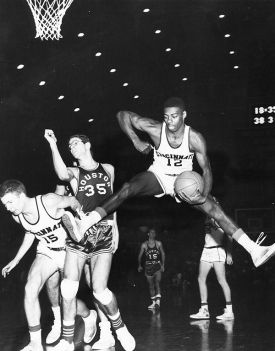 Hall of Famer Oscar Robertson, Bus '60, HonDoc '07, was a force to be reckoned with as a Bearcat, an Olympian and a professional basketball player.

It was the summer of 1960 during the Rome Games when new graduate Robertson, Bus '60, HonDoc '07 -- along with fellow Hall-of-Famers Jerry Lucas, Jerry West and Walter Bellamy -- helped the U.S. team to one of its most convincing gold medal performances ever. Co-captain Robertson and Lucas led the undefeated American squad in scoring, each averaging 17 points per game over eight contests. The U.S. team swept through the international competition by beating their opponents by an average of 42 points.

Robertson, already a three-time pick for National Player of the Year as a Bearcat, followed his Olympic success with an incredible pro career in which he was a 12-time NBA All-Star. Fellow Olympian and Cincinnati Royals teammate Jerry Lucas once offered these words to the Indianapolis Star about the Big O: "He obviously was unbelievable, way ahead of his time. There is no more complete player than Oscar."