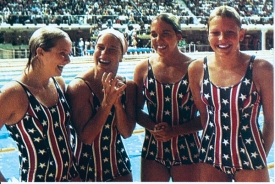 Jenny Kemp (third from left) and her U.S. teammates celebrate a gold-medal swim in '72 only seconds after defeating East Germany by four-tenths of a second in the 4X100 freestyle relay at the Munich Games.

Former Olympic swimmer Jenny Kemp remembers the sound of gunfire. She and a large group of athletes had been in the city and were on their way back to their accommodations in the Olympic Village.

"One thing they always did for all the events at the end of the night was they shot off fireworks," she says. "We heard this stuff and we thought, 'Oh, it is just more fireworks.'"

Kemp, att '75, found out hours later that the sounds they had heard were actually the beginning of the worst tragedy in Olympic history. The terrorist group Black September had stormed a nearby dorm that housed the Israeli wrestling and weightlifting teams, killing two and taking nine hostages. By the end of the ordeal, the militant group killed 11 Olympic athletes and coaches and one German police officer.

"Our manager had come knocking on the door letting us know what had happened during the night," says Kemp, only 17 at the time. "I immediately went down the hall to some of the other girls' rooms and said, 'Do you think that is what we heard?' "It was unbelievable. I was so angry. It was such an interruption to the whole process of what was supposed to be happening. I felt bad for the people who were still supposed to be competing. I mean, where do you go from there?"

Kemp remembers many of the Olympic athletes from the village assembling on a huge grassy knoll that day to mourn. "We talked a lot about the Israelis," she says. "They were huge people. They were great guys. Everybody had wanted their pictures with them." Though the Games went on, Kemp's team, along with many others, left Munich before closing ceremonies.