Looking fairly at both sides, Dr. Howard Tolley [JD '83] makes a cogent case for keeping tenure ["One Professor's Take on Tenure," February 2007]. However, he unnecessarily uses "adjuncts" as a foil for his argument. Adjunct faculty, either temporary or under longer contracts, should be considered as complements and supplements to tenured faculty.

In his experience, Dr. Tolley claims that adjunct faculty do not perform student oversight work. In fact, during the 1960s and 1970s at UC's Graduate Department of Community Planning, the adjunct faculty taught classes, supervised fieldwork, advised students on theses and careers, and attended department faculty meetings on a regular basis. The adjuncts, local professional planners and community organizers enriched the department with their diversity and provided energy, experience and skills for the university -- otherwise unattainable -- and in return received academic respect and token salaries to mentor and teach some first-class students. 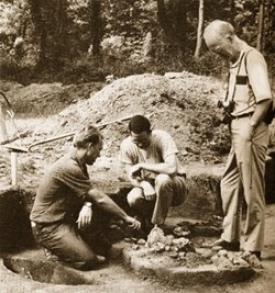 Professor Gustav Carlson (standing) examines the findings of a student anthropological dig at Miami Fort in 1966.

Bravo on a terrific issue. You and your team deserve much praise. I was particularly pleased to see the feature on the gentleman who hired me in 1970. Professor Gustav Carlson [pictured at right ] was a "class act."

I wanted to acknowledge Howard Tolley's excellent piece on tenure. He covered all of the critical facets and issues, and "UC Magazine's" broad readership -- internal and external to the university -- was well served.

You have produced lots of great magazine issues for UC, but the February "UC Magazine" is the best ever. Thousands of alumni are going to see familiar faces that bring back good memories. You've outdone yourself.

The February issue was one of the finest "UC Magazines" I have read during my experience at UC in 46 years (1961-2007, teaching English). I was overwhelmed by the superior quality of the entire issue, primarily on the emphasis of teaching; outstanding faculty; feature essays by James Schiff, Kenneth Ghee and Howard Tolley; favorite faculty profiles; and seven "prized" professors, plus the fabulous feasts. In addition, I like the scattering of appropriate quotations throughout. That added spicing.

I should like to express my appreciation for the February 2007 issue for its colorful and fascinating articles about present and past faculty members.

Since I graduated in 1938, not many were known to me except Herman Schneider and Gustav Carlson [pictured above ]. However, as a college professor and librarian myself in two quite different cultures, I found that many of the articles resonated with me because of my own philosophy of teaching.

In all of the changes in the reconstruction and remodeling of the campus, I'm wondering what happened to the tennis courts named for my father, Boyd Chambers, who was a coach from 1918 until about 1928. (I did recognize a picture of Nippert Stadium, built during his tenure.) Keep up your good work.

Editor's note: Boyd Chambers had an illustrious career at UC, where he was the men's basketball coach from 1918-28 and simultaneously the UC football coach from 1918-21. In '28, he stepped down from coaching to become UC's first full-time athletic director. The tennis courts named in his honor were located near an amphitheater, both of which no longer exist because the College-Conservatory of Music complex was built on the site in 1967, according to university archivist Kevin Grace.

Thank you very much for the article about Gus Carlson, my husband for 72 years. He was very special and I know well loved by many students, some of whom still keep in touch with me.

I was so thrilled to read about Dr. Carlson ["Class Acts," February 2007] who was my professor in the liberal arts program from 1943-47. I think about him from time to time, and I was so happy to read that he lived a very long time. [He just died in 2006.] The magazine is something all of us can take pride in. It is so well organized and is full of information. Quite a magazine we have there. I read it from cover to cover and enjoyed it all.

Editor's note: After the last issue of the magazine, we were flooded with responses from alumni sharing memories of UC faculty. All of them are published online.

I applaud your makeover of the UC magazine. It is much more interesting to read and look through as opposed to the old "Horizons" mag, which was sterile in design as well as content. As for the Bearcat mascot, his makeover is still a cutesy bear that has smoked a little too much 'erb. I think the C-paw, on the other hand, is a great logo. Keep up the good work! 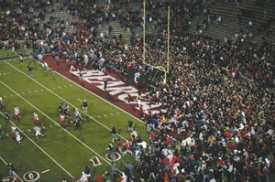 The photo of the faithful storming the field as the Bearcats knocked off undefeated seventh-ranked Rutgers at Nippert Stadium Nov. 28 salutes the 30-11 win, the biggest upset in UC football history, assuring the team its fifth bowl in seven years.

While I must agree that the Rutgers upset was a huge victory for UC, an argument could be made that UC's defeat of Penn State in 1983 following their national championship in '82 was an equally huge upset. Apparently Penn State's Coach Joe Paterno hasn't forgotten it, as evidenced in his press conference from last year.

Do people tend to underestimate Cincinnati, especially since PSU once beat them 81-0?

I don't think enough attention is brought to Ed Jucker, the UC basketball coach in the early 1960s, who brought the only NCAA championship to UC twice and almost a third time. It is true the basketball court has been named after him finally after many years. I think a story on Ed Jucker would be interesting to the UC community and bring back some great basketball memories.

My mother is Ed's sister. My family has lots of great memories of growing up with the Jucker family and many memories of UC basketball during the "glory days" of the 1960s. My brother and I could go on and on with stories. Neither of us are UC alumni but are still avid fans of Bearcat basketball.

Editor's note: The court inside Fifth Third Arena is indeed called the Ed Jucker Court. The last story we ran on Coach Jucker was several years ago and is available online, as is his obituary We invite readers to send us their memories of the coach, and we will print them in an upcoming issue.

Thanks for reconnecting me to UC. I think your magazine is a great vehicle for giving alumni a glimpse of the progress their alma mater has made since they've been gone.

"UC Magazine" is my eyes and ears to the university since I left campus in 1994 and is a big part of my continued alumni support. How about trying to produce it on a quarterly basis?

Editor's note: Publishing a quarterly magazine has been in the division's communications plan for several years. Finding the money to increase the budget by 33 percent to do so, however, is a stumbling block.

The man on the left in the photo on the second page of your February issue is not Henry Hauenstein (misspelled "Havenstein"). I attended UC beginning in 1942 with time out for WW II, and I don't believe I ever wore a suit to the News Record. I was on the staff for some time but graduated in 1948.

Submit a letter to the editor