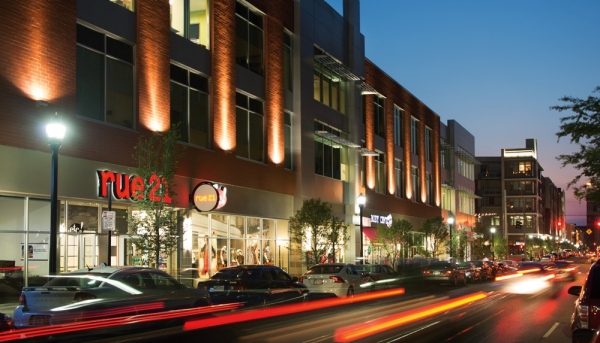 Just as UC has continually improved since adopting its Master Plan in 1989, the surrounding community has begun following in the university’s footsteps and evolving into a vibrant retail area. That positive connection is most apparent along Calhoun Street, which borders the south side of campus.

For more than a decade, Calhoun Street had continually shown signs of transformation — beginning when the popular Urban Outfitters put down roots in a historic Presbyterian church it rehabbed in 2002.

In 2005, a 1,000-car garage opened up on the Calhoun edge of campus, next to the Corryville Catholic Elementary School. Above the garage is Calhoun Marketplace, which includes 37,500 square feet of commercial property and privately operated apartments for 750 students — all on Calhoun’s north side. Some of the retail outlets are Panera, Currito Burrito, Potbelly Sandwiches, Fifth Third Bank and FedEx. 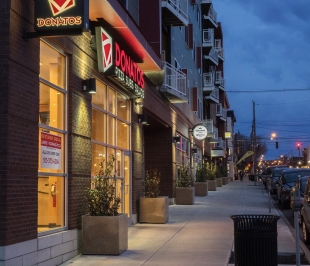 In 2013, an $80 million investment created infrastructure for new restaurants, retail stores, upscale apartments, a garage and office space for several UC departments — all on Calhoun’s south side. The popular location is known as U-Square at the Loop, featuring restaurants offering sushi, Mexican food, craft beer, burgers and shakes, among others.

Now the Corryville neighborhood east of campus and associated with Short Vine Street is following in Calhoun’s footsteps. At the southern end of Short Vine, Kroger and Walgreens have begun to reconstruct and enlarge their buildings. At the northern end, closer to the medical campus, new restaurants are popping up with menus offering Belgian waffles, Caribbean food and Southern barbecue. 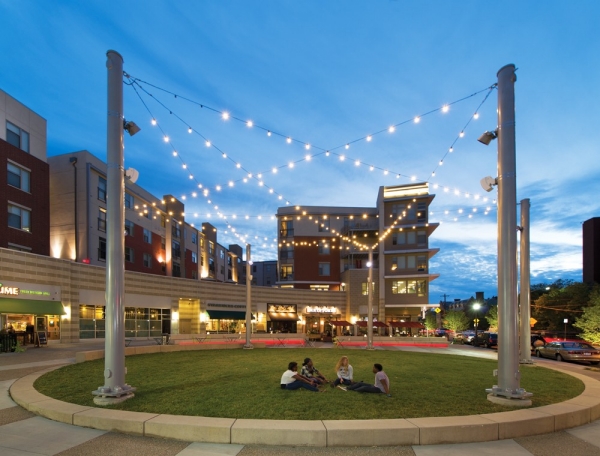 U-Square at the Loop along Calhoun Street offers plenty of dining and drinking options, as well as this grassy area for relaxing or hosting events. Photo/J. Miles Wolf 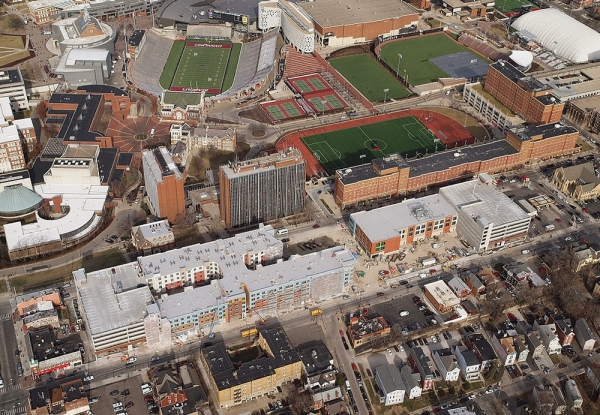 An aerial view reveals block after block of new development just south of the university between Calhoun and McMillan streets. Taking up most of the bottom lefthand side of the photo, across from Calhoun Hall, is the U-Square at the Loop development (while still under construction). In the middle of the righthand side of page, the long brick building running along the soccer field is Calhoun Marketplace. Photo/courtesy of Al Neyer Inc.