5 things you won't 'see' on campus

We’ve shared dozens of tangible things in this issue that you can both see and do around UC, but perhaps equally as memorable are those intangible parts of campus that you can’t see.

In some instances, it is the sounds of campus that stick with us longest, and in others it’s the legendary tales or even recollections of buildings that are no longer here that we tend to hold as our fondest memories. 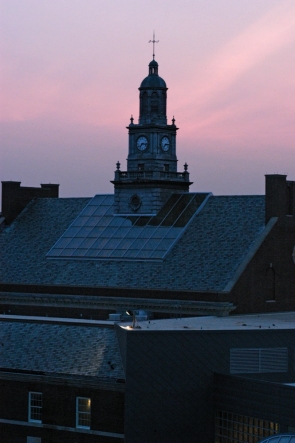 Tangeman University Center clock tower bells have filled campus with chimes and melodies at all hours for decades.

Each day at noon and 6 p.m., the chimes inside the iconic clock tower that sits atop Tangeman University Center play UC’s “Alma Mater.” When the beloved structure isn’t sounding off with its twice-daily featured melody, it’s reminding all those who walk within its midst of every quarter hour’s passing. 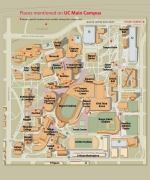 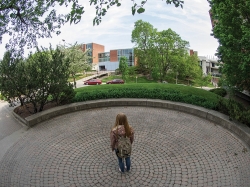 Echo Point is an unmarked treasure on campus, but it is worth a stop to listen to your voice reverberate back to you. photo/Jay Yocis

The sounds of Echo Point

Though it isn’t marked as such, Echo Point is the single location on campus where your own words will always come back to you. The circular brick plaza behind Braunstein Hall and just west of the Geology-Physics building was designed so that when you stand in the exact center and face north, your voice will echo back as if you were inside a giant drum, but no one standing near you will hear it. 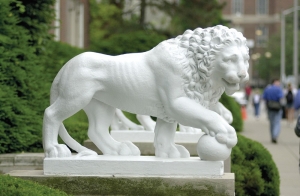 Do Mick and Mack roar when a virgin strolls by? According to campus legend (and Snopes.com), they just might. photo/Peter Griga

UC’s longest-living urban legend dates to pre-World War II. Legend has it — and Snopes.com repeats it — that UC’s stone lions will roar if a virgin walks between them. UC’s normally silent Mick and Mack have stood guard at the university’s front lawn since their installation more than a century ago in 1904.

Read about UC's other urban legends 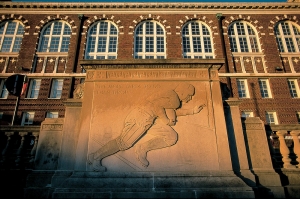 This memorial above the south endzone of Nippert Stadium was placed to remember the former player who died following an injury he received on the field in 1923. photo/Jay Yocis

The reason you won’t see Jimmy Nippert’s grave on campus is quite simple: It isn’t there. Although there is a historic monument at the top of the south-end-zone stands of Nippert Stadium, it is not Jimmy’s final resting place, though often mistaken for it. The man for whom Nippert Stadium was named is buried in Cincinnati’s famous Spring Grove Cemetery.

Nippert’s family paid to finish a large portion of UC’s football stadium after the former lineman died from an injury he received on the field in 1923. The relief on the stadium side of the monument has what are reportedly Jimmy’s last words, “Five more yards to go — then drop.” 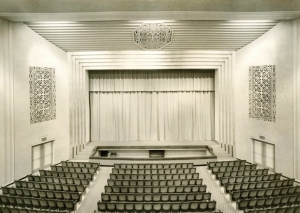 Wilson Auditorium was once the prime space for major acts that came to campus. The building was demolished in 2013.

For 83 years, Wilson Auditorium stood at the corner of Clifton Avenue and Clifton Court. The once grand art-deco-style facility was demolished in November, but not before inspiring countless memories from students and faculty who so fondly recall what was once UC’s featured stage and one of its most popular large-classroom settings. Wilson’s 1,200-seat auditorium hosted many national acts and celebrities over the years including Paul Newman, Elvis Costello, the Byrds and Frank Zappa, just to name a few.

The facility was also home to CCM’s Drama Department from 1984 to 1999. Once newer venues opened on campus, the building, which had many structural challenges, closed in 2000 and continued to deteriorate until its demise last fall.

Read dozens of personal recollections from readers about Wilson, see a video of its demolition and historical images in our Wilson tribute feature.

You can also watch the 1991 implosion of Sander Hall, another ever-popular campus building that only lives on in our memories.