I was thrilled and amused to read in the last issue of “UC Magazine” that UC had been named one of the world’s most beautiful campuses by Forbes magazine. I could not help but recall how my friends and I would describe campus during our student years in the mid-’80s, “Well, it looks like God took all the buildings from other colleges that they didn’t want, put them all down in Clifton and called it UC.”

Between an abandoned Sander Hall, a decrepit Tanners Hall and the various other incongruous architectural choices around the campus at that time — not to mention the lack of open green space — it was a campus only a Bearcat could love, which we did. I have been unable to return for a number of years, so I am thrilled UC has become an objective place of beauty, as well as a wonderful place to get an education.

Thank you for the profile of IvaDean Lair-Adolph. I’m sure every UC medical student who ever came in contact with her has fond memories. I still remember my first day walking into that back office. I was recognized and greeted by name by IvaDean and Norma Wagoner. They had made up a board with our pictures and names on it, and they seemed to have memorized every one. What a nice welcome to the college.

It has been a few years since I’ve been back, but I expect IvaDean would still manage to remember the much older me.

Speaking of Dr. Wagoner, in doing an online search, I learned that she serves on the Medical and Professional Advisory Council for the Arnold Gold Foundation, which is dedicated to fostering humanism in medicine and was started in 1988. Dr. Wagoner and IvaDean practiced humanism daily with each of us years ago and made us better people and doctors for it.

As an ex-UC swimmer and current triathlete, I was thrilled to see an article on the accomplishments and goals of Josh Schneider. However, the author failed to mention that UC is phasing out scholarships for men’s swimming and diving, along with men’s track and cross-country.

This very unfortunate turn of events could severely jeopardize the performance of these teams. We need to continue to put pressure on the university to restore these scholarships, but in the meantime, please give to the men’s swimming and diving endowment to help support UC athletes like Josh.

Editor’s reply: Due to budget constraints, UC announced in 2009 a four-year phase-out of scholarships for men’s swimming and diving, as well as men’s track and field/cross-country. Once all aid is transitioned, the $400,000 annual savings will allow UC Athletics to move toward a balanced budget.“

This was a very difficult decision, but one we felt we had to make in this difficult economic climate,” says athletics director Mike Thomas. “While scholarship funding will be eliminated for these sports, the teams themselves, and their complement of coaches, will continue at UC, leaving open the opportunity that at some point in the future, financial aid could return.”

Because UC Athletics is eliminating the way it funds scholarships, donations are important, and individual sports are fundraising on their own. Men’s track and field, for example, has three endowed scholarships, and coach Bill Schnier launched a new fundraising campaign this fall. Contact him at 513-556-0562 for details.

Also, men’s swimming and diving just added a new endowment this fall, when NCAA qualifier and former school record-holder Blake Layda, Eng ’99, designated a significant grant for engineering students with a preference for members of the swim-dive program, coach Monty Hopkins, Bus ’78, explains. Besides financial contributions, the coach also seeks donations of time to solicit gifts. He can be reached at 513-720-7946.

As a proud UC graduate, I look forward to “UC Magazine.” I believe the “life lessons” article in the August issue could have highlighted someone other than Rich Franklin. People die in Ultimate Fighting. It is violent and savage and not something to be promoted.

Editor’s reply: Since the first Ultimate Fighting Championship in 1993, competitions have changed dramatically, specifically with the inception of the Unified Rules of Mixed Martial Arts, which include regulations to minimize injury. Research by the Johns Hopkins University School of Medicine in 2006 concludes, “The overall injury rate in MMA competitions is now similar to other combat sports, including boxing.”

I love receiving “UC Magazine” in print because I take it with me when I travel and show articles to my family. The paper, print style and graphics are so impressive. I always look forward to reading it — or maybe “savoring it” would be a more accurate word. The magazine keeps getting better and better. 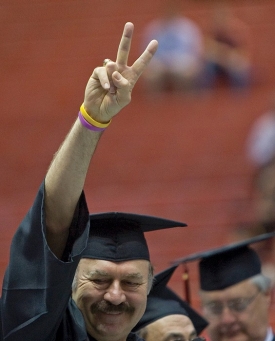 Regarding why UC closed in the spring in 1970, I have a somewhat different recollection than the letter writer in August. My memory is that immediately after the Kent State shootings, the governor closed all the state schools, and there was a fear over UC staying open — because it was still a municipal university and not subject to the governor’s order, it might attract a large protest, converging on the still-open UC campus. Actually the campus first closed for a week, then some days later decided to close for the remaining four (plus or minus) weeks of the quarter. At least that’s what I remember 40 years later. Keep up the good work.

Dear somewhat misinformed friends: I remember 1970. It was the year I graduated from UC Business. What I distinctly remember was Antioch College students taking over Dr. [Walter] Langsam’s office, and he did nothing. One Antioch student tried to intimidate me with his shout that I should not cross his picket line. I informed him that if he tried to stop me from going to my class, he’d have his picket sign protruding from his mouth. He ran off with a whimper.

Ergo, I do not have “sweet” memories of those days. I had wished, and continue to wish, that Ol’ Langsam had exhibited some spine.

Editor’s reply to both letters: According to UC archivist Kevin Grace, MA (A&S) ’77, “President Langsam did do something, although some may disagree with what he did. He refused to talk to students, then convened all his administrators to discuss his course of action, which was to close the university.”

The university closed on Friday, May 8, 1970, following the May 4 incident at Kent State University in which the Ohio National Guard shot and killed four students and wounded nine others. Student unrest around the country had been growing since President Richard Nixon’s announcement that U.S. military activity in Cambodia would expand.

UC’s main campus remained closed the following week, while classes resumed on Monday, May 11, at Raymond Walters Branch, the Ohio College of Applied Science and its Ohio Mechanics Institute Evening College (as they were then called), according to Cincinnati Enquirer articles. During that week, students and professors kept scholarly activity alive by meeting in professors’ homes and other establishments.

On May 14, plans were made to reopen the main campus on Monday, May 18.

But late that night, Mississippi police and National Guardsmen who were trying to quell rioting students at Jackson State College killed two students and wounded 12 others. Over the next days, tensions — now laced with racial issues — grew on college campuses throughout the country.

Late Sunday night, UC’s advisory University Senate voted to keep the main campus closed for the remainder of the term. Around 2:30 a.m. on Monday, the governing University Board of Directors voted to do so. Although commencement was held on June 14, many students did not return for the event.

An Enquirer editorial on May 20 called the closing “regrettable, but justified,” explaining: “If one person is spared injury, one confrontation does not materialize, one building endures undamaged, then the inconvenience and imposition of the suspension will have been worthwhile.”

As letter writer Henry Jackson noted, UC was a municipal university in 1970. On May 6, Gov. James Rhodes recommended that state universities close, but he left the decision up to each school. Estimates indicate more than 900 institutions of higher education closed across the nation, roughly one-third of all schools.

10 years off
In the August 2010 issue, you published a letter from my father. Although he was kind enough to give me credit for graduating from the UC School of Law, he listed my year as 1972 (which would have been at age 15). My actual graduation date was 1982. But what’s a decade among friends and alumni!?

UC East in rented Ford plant
UC does not own the former Ford plant, which is being used as the UC East facility in Clermont County, as indicated in the last news section of “UC Magazine.” UC is only leasing two floors of the former facility’s administrative building, which amounts to 81,000 square feet of office space. UC Clermont College began offering classes on the first floor this fall. On the second floor, UC’s College of Nursing and the College of Education, Criminal Justice, and Human Services will offer a number of bachelor-degree completion programs, including the bachelor of science in nursing.

There is no plan to use the actual manufacturing plant at this time,” says associate provost Tom Cruse.